Haunted Los Angeles: Exploring the Shadier Side of the City of Angels

Los Angeles is known around the world for its abundance of warm sunshine filled days, iconic palm tree lined streets and glamorous people, but there is a darker side to the City of Angels, a shadier side if you will, and no I’m not talking about the traffic. I’m talking about the mysteries, murders, suicides, and hauntings.

The opportunity to learn about the darker side of LA’s history presented itself when I was invited to join Cartwheel Art’s new Downtown LA walking tours: Paranormal Nights and LA Vice.

Led by historical journalist, Hadley Meares, the tours were a perfect mix of history and horrific. Along the way we were treated to spine chilling tales of unsolved murders, bombings, mysterious elevators, haunted hotels and more.

Our tour started at the Millennium Biltmore Hotel an appropriate choice as it’s considered to be haunted by multiple spirits. Built in 1923 the Biltmore catered to the rich and famous and was an early home to the Academy Awards ceremonies.

One of the hotel’s more famous haunts is Elizabeth Short, who after her death came to be known as the Black Dahlia. She was last seen in the hotel six days before her mutilated and severed corpse was discovered in a field in the Leimert Park neighborhood of LA. Due to the gruesome nature of her death her case because a national sensation and it is still unsolved to this day. 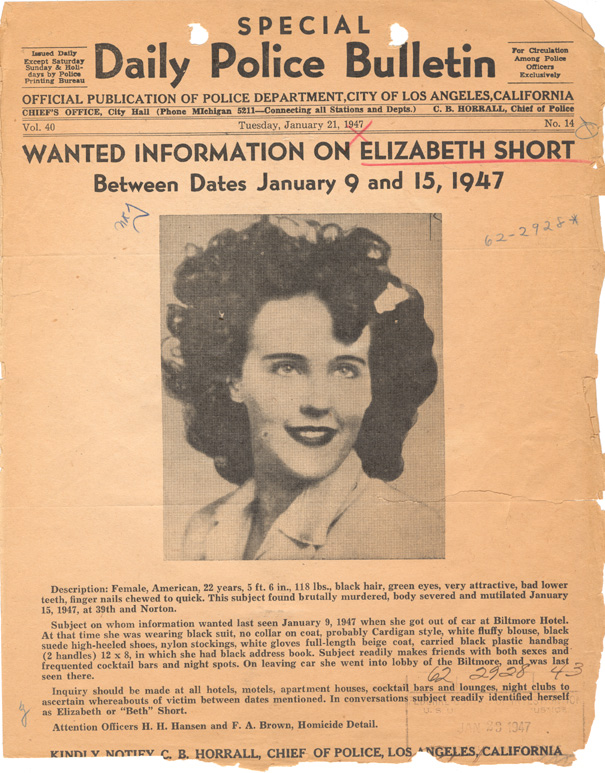 A police bulletin taken from the FBI Archives

Searching for the supernatural? Elizabeth Short is just one of the many spirits said to appear to guests of the The Millennium Biltmore… check in if you dare.

Winnie Ruth Judd aka The Tiger woman, The Blond Butcher and The Trunk Murderess was accused and convicted of murdering her friends, Agnes Anne LeRoi and Hedvig Samuelson, in Phoenix, Arizona in October of 1931.

The Trunks Photography is courtesy of the History and Archives Division, Arizona State Library, Archives and Public Records., obtained from http://azmemory.azlibrary.gov/

She stuffed their bodies one of which was dismembered into trunks and other luggage and took the train to Los Angeles. Her heinous crimes were discovered when a strong putrid smell and blood leaking from her bags drew attention from station personnel.

Unhappy with the original architect’s plans, Bradbury asked George Wyman a draughtsman with no formal training to take the job. Worried about taking the commission away from his boss Wyman used a planchette to consult with his dead brother. Supposedly the brother told him “Take Bradbury you will be successful.”  And so he was…

The 1910 Bombing of the Los Angeles Times Building

In the early hours of October 1, 1910, a bomb exploded in Ink Alley next to the Los Angeles Times. Set by disgruntled union workers the explosion started a fire killing 21 employees and injuring as many as 100 more. Tragedy wouldn’t stop the presses and the day’s edition was printed at the Los Angeles Herald.

Horror at the Cecil Hotel (The Suicide Hotel)

Built in 1920 the building once known as the Hotel Cecil is easily the most notorious building in LA. Originally built to cater to business men and travelers it fell upon hard times during the depression and became home to drug addicts, derelicts, and two serial killers: Richard Ramirez the Night Stalker, and Austrian Jack Unterweger. Many people have died within the hotel over the course of its history including multiple suicides and murders. One poor soul was killed when he was struck by a body falling from above.

In 2013 Canadian tourist, Elissa lamb, disappeared while staying at The Cecil. Her body was found three weeks later in the hotel’s rooftop water cistern. A video of Elissa behaving strangely in the hotel elevator just prior to her disappearance has been viewed 22,679,290 and has led many people to believe the hotel is haunted. This and other dreadfully frightening stories helped to influenced the 5th season of American Horror Story: Hotel.

The hotel was renovated renamed to The Stay on Main in 2014 and is currently undergoing another rebranding. You won’t catch me at the Cecil, no matter what they decide to call it next.

Opened in 1906, The King Eddy Saloon, has a long and storied history. The basement operated as a speakeasy during the prohibition era and has long been popular with  famous actors, writers, and poets. With over 100 years of history it makes sense that the King Eddy Saloon would also be haunted.

One of the bar’s more famous stories is that of the vanishing hitchhiker. According to legend a repeat customer is an extremely intoxicated woman who, just before closing, asks a mail patron for a ride home. She borrows his jacket and gets in the car. When they drive by the Evergreen Cemetery she asks to get out and disappears into the graveyard. The man finds his jacket draped over a gravestone bearing the same name of the woman.

Indian Alley also known as Apache Alley, Blood Alley and Heroin Alley was at one time the Native American Skid Row. Sculptures and murals created by members of the Native American community line both sides the alley and pay tribute to the area’s dark history. The alley is overseen by These Days Gallery, which is located just next door. Contact the gallery to arrange a tour.

The final stop of our Haunted LA tour was The Wolves a newly opened bar and restaurant located in the historic Alexandria Hotel building. Famous guests of the hotel include Rudolph Valentino, Jack Dempsey and Charlie Chaplin and the hotel is said to be haunted by multiple ghosts.

The Wolves bar and restaurant DTLA

With interiors inspired by the year 1910 stepping inside The Wolves is like going back in time. Period antiques from across America including a stunning train station ceiling from Paris, Illinois help to complete the feeling of total immersion.

The Wolves bar features vintage billy clubs from a darker time in LA.

Original details from the interior of The Wolves in DTLA

If you’re interested in finding out more about LA’s dark history consider joining one of Cartwheel Art’s new 90 minute downtown walking tours. Tickets must be purchased online in advance.

Disclosure: I was invited to join a press preview of the Paranormal Nights and LA Vice walking tours. All opinions shared and nightmares I had as a result of these tours are my own.

I love to travel & explore the world both near and far! I do my best to make the most out of life each and everyday! I have two boys and they are, at the ages of 13 and 18, world travelers and all around go along guys. There isnt anywhere I cant take them. It is my hope this blog will be a way to share the fun things Ive learned while on our many adventures together! View all posts by Hilary

This site uses Akismet to reduce spam. Learn how your comment data is processed.